Adaptability: The Essence of Primitive Cultures 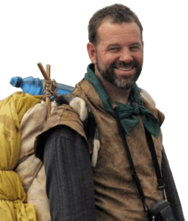 The Essence of Primitive Cultures

Primitive peoples had no choice about whether they were going to

practice their skills or not.  It wasn’t a sport for them; it was survival.

Today we do have choice.  We choose to go; we choose where to go, and how

long to stay.  We choose what to bring, and what not to bring.  Each of us

doing.  In effect, we all make up our own rules of the game.

Like many of my peers, I was originally attracted to primitive

living out of an ideal of “living in harmony” with nature.  It seemed that

kind of balance, and I wanted to be part of that.  With this ideal in mind,

than as a pragmatist.  I went out with almost nothing, to become “one with

nature”, but instead just got cold and hungry.

I started out, and still am, a “purist”.  I want to do everything

“authentically” as  primitive.  Yet, while I still consider myself to be a

“purist”, I have redefined what that word means to me.

achieve primitive living only by replicating the techniques that have been

used and documented from past cultures.  This might mean, for example, to 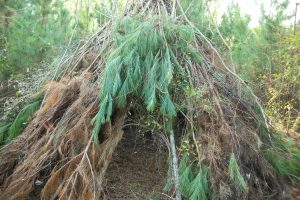 stone-age.  Subsequently, it also means to make those tools using other

The objective of the purist approach is sometimes archaeological, but

often ideological.  That is, sometimes the goal is in the physical

techniques and technologies themselves, but at other times the physical

skills are used as a means to achieve a particular ideal or mood, perhaps

to create or recreate a sense of “living with the earth”.

Our ancestors however, did not need a mood or philosophy for living

true creatures of nature, they just lived their lives day-to-day.  They

needed no philosophy for that.

seem to live their lives.  They eat, sleep, play, and raise young.  As far

as we can tell, however, they do not philosophize.  A deer may seem curious

about a shiny aluminum can, but it does not apparently have any beliefs

about it.  To the deer a can is neither good nor bad, natural or

their world at face-value.  They do not seem to judge their environment in

any way, except as threatening, or non-threatening. Mice and bugs often

inhabit old rubbish.  Deer often bed down in abandoned houses. To them it

is useful habitat and nothing more. 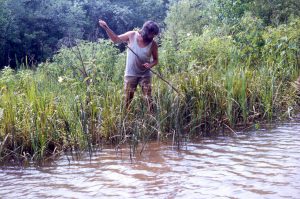 Like true creatures of nature, our ancestors often had a

non-judgmental view of the world.  The bottle, for instance, was not

rejected as “unnatural” or “wrong” by Native Americans, but was often

utilized as a source of glass for knapping points.  They did not disdain

European products as being “unnatural”, but eagerly sought them through

economic trade-so much so, that the horse, the canvas tipi, and glass beads

became the symbols of “Native American culture”.  In short, the essence of

the primitive approach to life is adaptability.

Primitive cultures survived by adapting to their environments.

They used the best resources at hand to meet their needs.  They were not

wrong to use.  They simply used the best of what was available.  Primitive

foot-wear for instance, was always limited by the short life-expectancy of

the soles.  (I read in once case where a mountain climbing expedition in

Colorado wore out three pairs of moccasins in a single day.)  When tires

became available in more recent times they were quickly converted into

footwear by the remaining “backwards” cultures, notably in Mexico.  In

essence, being a purist is not a matter of replicating the past, but of

successfully adapting to the present.

Anthropologist Richard B. Lee learned this first-hand in 1963 when

!Kung, a modern hunter-gatherer culture.  The day after his arrival, the

!Kung told him there was no food around and that they were hungry.  They

where there was some food.  In two hours the !Kung filled the pickup bed

with a large pile of mongongo nuts.  In that time the men picked enough to

sustain themselves for five days, while the women picked enough for ten

days sustenance.  All the way there the !Kung sang songs about getting fat

while the truck did all the work, and that people who worked for a living,

that was their problem!  Lee commented that the !Kung were making

intelligent use of their resources.  Instead of walking a long distance in

the heat for a small meal, they adapted, and took advantage of the truck

(and a gullible anthropologist), to get ten large meals.

In primitive cultures the driving force of belief is and was

economics.  To survive and prosper, primitive peoples had to harvest more

calories of energy than they expended.  They had to adapt and make

economical decisions to enable them to harvest more calories with less

effort, just as we do today.  They would not resist using a rubber tire for

sidewalk.  We practicing primitives today may attempt to replicate the

past, but we fail in our endeavor, because the essence of primitive culture

is to successfully adapt to the present! 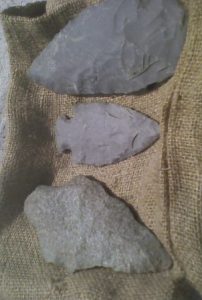 The !Kung were also the actors in the movies “The Gods Must be

Crazy” (I & II).  The director, interviewed on television, said that the

!Kung had absolutely no inhibitions about acting for the cameras.  In fact,

the star in these films later went on a world tour.  In Japan alone he rode

on subways and trains, mingled with people on city streets, and humbly

waved to thousands of fans.  (The movie was apparently a big hit in Japan).

shock, but he was reportedly rather unfazed by it.  He returned home, wore

his sneakers for a few weeks, and finally pitched them to go barefoot.

These simple peoples had no apparent fear or inhibitions about our

fantastic technologies, while us modern primitives are comparatively

“primitive”.  We fret over whether we made our arrowheads with genuine

antler, or if we “cheated” and used a copper tips.  We debate whether or

not we should make use of a wild plant because it is an introduced species,

and is not “natural” here in America.  But these kinds of worries are the

essence of our culture, not of cultures past.

The purest flint-knapping experience I ever had, in the spirit of

ages past, was sitting in a century-old garbage  dump, flaking bottle

bottoms with a rusty nail, and using the sole of a boot for a pad!  That

after all, is what a true hunter-gather would likely do, if suddenly

transported to our time. 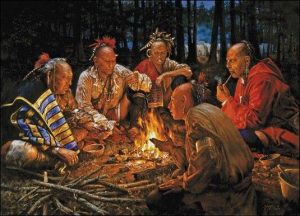 We modern primitives may think we want to recreate the past, but

that is simply not an option.  We have to make concessions to our time.

For example, we cannot use campfires in the forest when the fire-danger is

too high.  Primitive peoples routinely walked away from their fires and let

them burn out of control.  They did not care-it did not impact other

people.  But today we have to make shared management decisions.  We cannot

torch the forest either out of carelessness, or intentionally for the

purpose of “driving out game”.

“white man’s buffalo” is off limits.  We cannot make camp in all the places

where native peoples once made their camps, because most of those choice

sites are now our cities and towns.

Many historical resources are unavailable to us primitives today,

but new opportunities abound.  The invasion of European weeds has given us

hundreds of new and useful plants to work with.  Wildlife management and

hunting regulations have helped to rebuild the once decimated populations

of many game animals, and new game species have been introduced from

and cans, tires, and baling twine, that truly primitive peoples would have

Ultimately, the purist philosophy of primitive peoples is no

philosophy.  It is a practical approach to life, like the creatures of

nature, accepting all things equally at face value, without judging.  Each

element of this new world is considered for it’s own merits.  Adapt and

utilize that which seems useful.  It is not a way of thinking,  but a way

Thomas J. Elpel is one of the most interesting people you will ever meet. His life story is amazing. He is a builder, primitive/survival skills expert and publisher. He has done a lot to promote this craft of primitive skills. His involvement  with the Society of Primitive Technology and the many books he has published as well as leading many classes is well known. Check out his web portal and click on the links there to find out what all he does. Of particular interest to me is the directory of primitive skills teachers he keeps up to date. 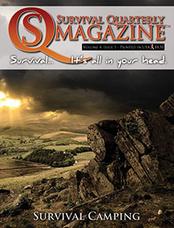 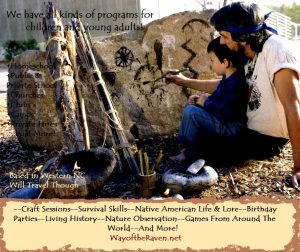 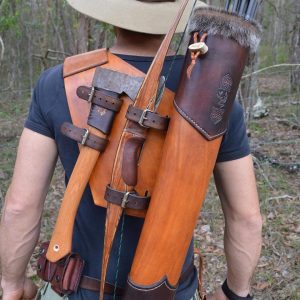 Check out Lowis Leathers. An Australian that produces some fine leather gear and sells it. Very nice quivers and setups, etc. On Facebook

Posted by: ravensway on November 1, 2016 Category: Uncategorized ← previous - next →