Acquiring Food in the Survival Situation 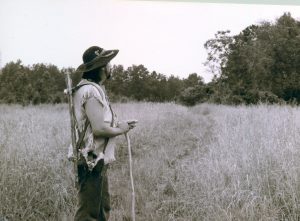 By Benjamin Raven Pressley
You’re lost, you’re hungry,  in the woods, you need to survive….What do you do?

First of all remember your priorities in a survival situation in this order: Shelter, Fire, Water, Food. If you don’t have water don’t eat. Your body uses a tremendous amount of water in the digestive process. You can only live four days without water but depending on your size and your health you can live 30 days or more without food. 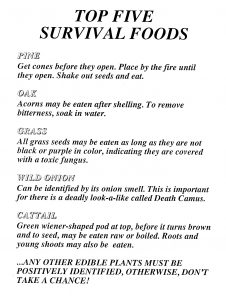 For the most part, I have found, that I have had to live on plants. The more knowledge you have of edible and medicinal plants the better but here are my top five that just about anyone can recognize: cattails, pines, oaks, wild onions and grasses. Cattail roots may be eaten raw or roasted, as may the wiener shaped pod at the top before it turns brown and to seed and tastes rather like corn on the cob. Also the lower part of the stalk is tasty when peeled and the inner pith is eaten. In the early Spring look for a pollen tassel on top of the Cattail plant. Shake the pollen off carefully into a container of some type and add it to a batter and bake small cakes from it. It is tasty and nutritious. Pine cones that have not yet opened may be placed near a fire until they open and then several tiny seeds that are rather nut-like in flavor may be shaken from them and are extremely nutritious. Also the inner bark of a pine tree may be chewed and spit out once you have chewed all the nutrition from it you can. The needles (leaves) of a pine also may be brewed into a tasty tea that is high in vitamin C. Oaks, of course yield acorns, that are edible upon shelling. Some are sweeter than others. The larger the acorn the less bitter they are. To remove the bitter taste they may be placed in a running stream in a bag or boiled or soaked in several changes of water. Most of us also know what wild onions look and smell like. This is important that it smell like an onion, for there is a deadly look-alike called Death Camus (Zigadenus elegans) that grows in the western U.S. Any grass seeds may be eaten except those that are purple or black in color. This is because these grasses are covered with a toxic fungus called ergot. There are many other edible wild plants, but none should be partaken of unless you are 100 percent sure of them. There are many deadly look-alikes. Field manuals are helpful on this subject, but it is better to learn how to identify edible wild plants from someone experienced. For some plants are only edible certain times of year and deadly at others. Whatever you do don’t believe the myth that if you see an animal eating a plant that it is safe for human consumption. Animals are able to digest many things we cannot. For example, box turtles may eat mushrooms that are poisonous to us. It is for this reason that they should not be eaten, for the meat retains many deadly toxins from poisonous mushrooms eaten by them.

‘Makin’ meat’, as the pioneers called it, is another matter. All mammals may be eaten. Most insects may be eaten, such as, grasshoppers, locusts, crickets and katydids. Avoid very colorful insects in general. Some insects like yellow jackets may be eaten if boiled. When boiled the stinger is softened and the poison is neutralized in the process. Yellow jacket soup was popular among the Cherokee. Stone flies and other nymphs may be eaten. Cicadas, ants, grubs and caterpillars may be eaten. Reptiles and amphibians must be properly skinned and eviscerated and may be eaten. Snake heads must be cut off for this is where their venom glands are located. One exception of reptiles that may not be eaten was 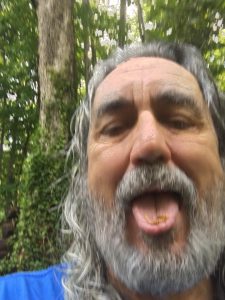 mentioned earlier, the North American box turtle. Birds, even small ones may be eaten. The consideration here, as with any survival activity, is to not expend more energy acquiring them than they are worth in nutritional value. For example, reptiles and amphibians are usually harder to capture than they are  worth. Frogs are great sources of nutrition but using a gig spear or a simple bow and arrow will better your chances rather than exhausting yourselves trying to capture them. All meat should be cooked, even insects, for all meat contains parasites that you will ingest if not cooked that could make you very sick or kill you. Small mammals, such as rats may be roasted on the coals, hair and all without skinning or eviscerating them, and then eaten, for additional nutrition.  Beware of mice and rats though, 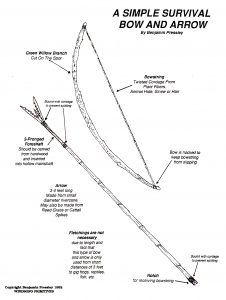 even in the wild, they sometimes carry Hantavirus which will kill you.  Roasting grasshoppers and crickets and grinding them and placing them in a stew is a much more appealing way to eat them to most people. Make sure you remove their wings and legs, however, as these may become lodged in your throat.
Here is an easy way to catch crayfish that works very well: Take a bandanna and fill it with chicken livers or fish entrails and gather the corners and tie it shut. Tie a string to it and throw it in a stream where you know crayfish are. Come back later and you will have several crayfish clinging to the bandanna trying to get to the bait. Just gather them up and boil them alive. They are like little lobsters. The meatiest part is the tail. If they are large enough you can get meat from the claws. And before you discard the rest of the body break off the head and suck the flavor from it like the Cajuns do! This technique also works for crabs. Beware though shellfish and mollusks should not be eaten if the water they are in is polluted.

As far as hunting weaponry goes you have many choices. I have an entire book dedicated to hunting weaponry. Fishing can be done with a pole, line and hook made from bone or wood or by placing fish traps, long, basket-like traps, in the water or by 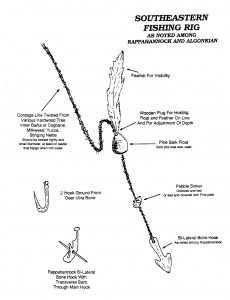 constructing weirs with rocks or sticks in the water. I talked some about fishing in my last newsletter and also offered a free e-book based on survival fishing techniques used by primitive people for hundreds of years. If you would like to have that book just CLICK HERE. Pretty much all fish can be eaten with some exceptions. I can only speak with authority on the fish and animals of North America. My friend Ted Bailey warns: “I lived in Panama in Gatun, as a boy and fished almost every minute of my free time.  On the Pacific side of the isthmus, you can catch a small fish that looks like a Snapper, but it has a soapy film over its outer skin.  It is slippery to hold and the natives will tell you not to eat it.  On the Atlantic side of the isthmus, you have to be careful eating large Dogtooth snapper and Barracuda because both of these fish eat smaller reef fish which have eaten a 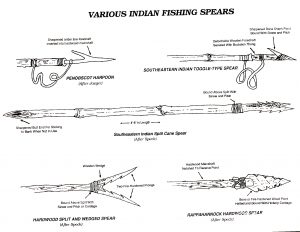 poisonous coral of some kind.  There are multiple guidelines I heard to avoid these toxins.  One is to avoid eating barracuda longer than 36 inches.  The other is to let the fish lay on the dock for 30 minutes and if the flies don’t show interest on the fish, then it is safe to eat.  A similar situation holds true in the waters of Florida.  I can’t remember the name of the toxin, but it is fairly well known in the tropical Atlantic and causes paralysis.”
Traps and Snares
Acquiring meat may be done by trapping, snaring, fishing or hunting. Learn a few deadfall triggers and snares. It usually takes 25-50 traps and snares set out in an area to keep one person in meat. You don’t just set one trap and get a rabbit in it everyday like portrayed in the movies, unless you’re very lucky! Knowing what the animals in your area are eating and being able to detect game trails and properly placing your trap or snare and concealing the trap and your scent are very important. Sharp pointed sticks can be placed in an area where there are game trails with various baits on them. Leave them overnight and then check them the next morning and you will be able to tell what the animals are eating in your area and then you can bait your trap accordingly. Fencing a trap is also important in the case of deadfall traps. This is using natural materials surrounding all sides of your trap to direct an animal in the way you wish him to go. It also camouflages your trap well.

Other considerations to think about are that it is sometimes necessary to put a stone in the ground under the deadfall trap. Some animals are so soft boned that they may survive a trap falling on them in soft ground. Sometimes you even need to put a stone under the trigger to keep it from sinking into the ground. And beware of human scent on your trap. This can sometimes be avoided as easily as rubbing the string you use and other parts of the trap in the dirt. The deadfall trap may also be used with birds but they will not crawl into a closed area. Rather than use a solid rock or log make an open cage-like box and bait the trap with something that will attract them.

​    There are of course many other means of acquiring meat and preparing it than covered in the space of this article and hopefully if you plan to be in the outdoors much you will check into in more detail. I do have other resources to offer you though as indicated below. Just click the icon for more information and to order. 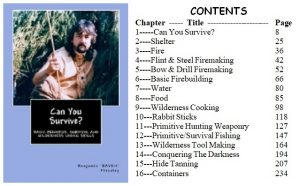 AND DON’T FORGET TO ORDER MY COMPLETE BOOK ON SURVIVAL SKILLS NOW AVAILABLE IN PAPERBACK AND DESTIN-E BOOK!