I have seen historical drawings of shoulder bags made from a duck hide and such and I must confess I have not tried to tan a bird hide so I consulted with some of my friends who have. Maybe some of you taxidermists might want to contribute to this conversation. I could not find any videos or drawings on tanning bird hides. So I am guessing it is rarely done. Looking for a friend…

Here is one method:
–Skin the bird with an exceptionally sharp knife and try to keep it as complete as possible ( I think you will run into some major problems around the tail and wings.
–Clean off as much fat as possible ( corn meal works well in soaking up oils and fats in liquid form, just dust it on, let it absorb and clean it off.)
–Carefully clean off blood and viscera from the feathers with mild soap. You can preen the feathers after the skin dries so don’t fuss over them too much.
–Tack the fleshed and cleaned skin with the fleshy side up to a board. Tack edges every 1/2 inch or so to hold the shape of the skin as It dries but don’t stretch it out too much (bird skins are very elastic).
–Cover the skin with table salt and borax (about 5 parts salt to 1 part borax) the borax will sort of sanitize the whole thing and prevent bacterial growth. The salt will draw out all the moisture left in the skin, and you may have to put a new application on as the first gets saturated. Keep the whole mess in a cool, well ventilated spot for a couple of weeks and the skin will be dry, sort of like rawhide. —Charlie Green 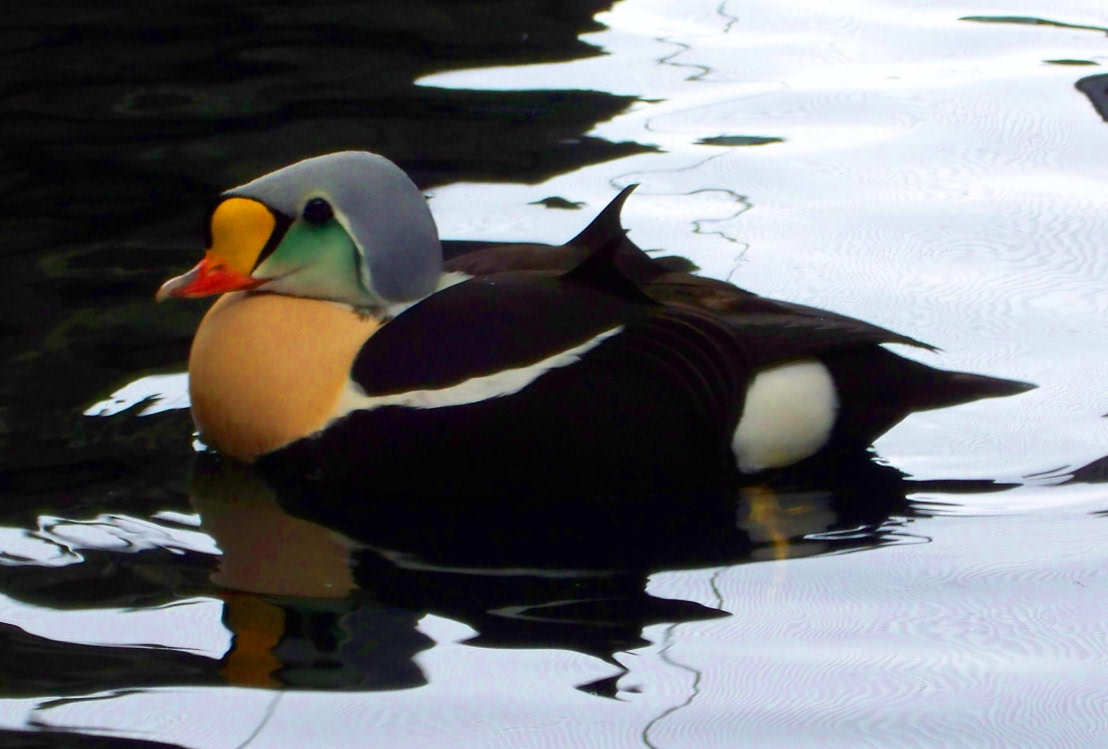 Here are some miscellaneous quotes from historic sources that may help:
This comes from the book “Our Boots, an Inuit Women’s Art” by Jill Oakes and Rick Riewe
“Eider, murre, and other bird skins were used for stockings and over slippers when caribou skins were unavailable. …. Silatik Meeko provided a detailed description of the techniques employed by women on the Belcher Islands.”

“Hunters bring back the eiders whole for the women to process.  After the birds are allowed to partially thaw so the skin can be easily loosened from the meat, the wings and legs are taken off.  The skin is sliced around the bill, another cut is made about halfway down the neck, and the head is pulled through this last incision.”

According to Meeko (1989):
“I hold the bill in my mouth, grasp the skin at both sides of the neck, and peel the skin down towards the tail.  The skin ends up being inside out. After removing excess blood and fat from the skin, I turn it right side out and rub it in snow until the feathers are clean.”
“The long neck skins are tied together in groups of two, hung over a line outside, and allowed to freeze-dry overnight.  Then the skins are turned with the flesh side to the outside to dry for about a day.  When the skins are partially dry, the loose surface fat is chewed and pulled off, and the fat embedded in the skin is removed by an action similar to sucking on a baby bottle.”
“Beginners quickly learn not to suck too hard, as you can pull the feathers right through the skin into your throat, but if you suck too gently, the skin becomes moist.  It takes about two hours to prepare one skin until it feels dry.  My throat becomes red and sore after sucking off fat for several hours, until I get used to it.  I often gain weight from swallowing some of the fat while preparing bird skins.” 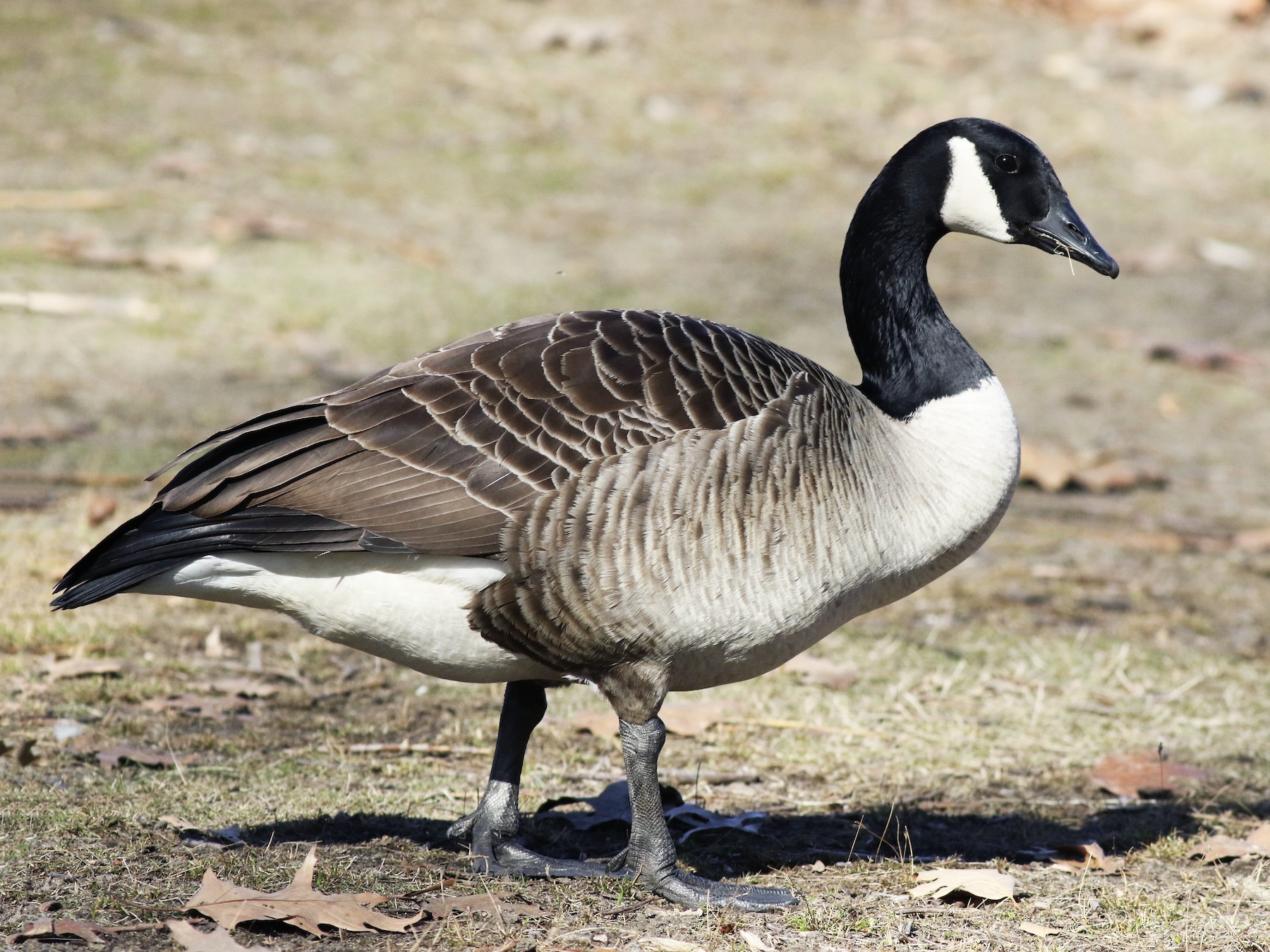 “In the Belcher Islands, way up north, the Inuit people one year saved their lives when the caribou did not migrate, by making coats out of tanned goose skins.  I saw such a coat at the Yellowknife museum in the Northwest territories when I was up there researching on sabbatical leave one year.
The skins were cut in a rectangle, and the feathers remained on the skin to make an incredibly beautiful coat which was obviously very warm.  I’m not sure about this, but I believe the skins were simply removed, meat and fat scraped off, then stretched out to dry.  They are thin skins and simple manipulation would soften them.  Judging by the color of the inside of the coat I saw, I would say that the skins were also smoked in a similar way as other hides.” —Dr André-François Bourbeau

“I’ve been following this thread with interest because I made a Grouse Hat which still works (though it is a bit ratty and missing quite a few feathers) after 10 years. I’ve also tried it with other birds… just for the giggles. This is what I did: With the grouse, I used the hot rock trick to cook the bird. When the bird was finished the skin slid off as it is supposed to do. I ate the bird. I turned the bird skin inside out and stitched the neck, wings and legs closed with gut from the bird and a needle made from bird bone. Nothing fancy. I filled the inside out bird skin with sand, till it was stiff. This made it easy to scrape the hide with another piece of bird bone. The sand protected the feathers. After it was scraped I used a borax/salt solution to wash the skin.
I’m going to drop the narrative at this point and just go to the steps:
–Let the skin dry for two days. It will feel starchy and appear to be semi-transparent. The feathers will be visible. Bathe the dry skin with a 50/50 mixture of glycerin and alcohol (the stronger the better Tequila is no good, everclear is ok and Isopropyl works) don’t drink the mixture.
–Rub the liquid into the skin until it begins to soften (I’ve been using the Alcohol/glycerine soak mix on snake skins for years. It works great with no other processing…… well…. pull off the fat with your fingers first!). If you want to, soak a rag in the mixture and wrap the skin. That will keep the mixture in contact with the skin for a longer period of time.
–When the skin feels fairly supple, open up your appendage holes and let the sand drain out. Carefully turn the skin back to the way it was when it was hatched. Now you can cut or wear the feather bag. It will remain fairly soft. If it stiffens just use the mixture again.
I’ve done this with quail, which is problematic since the skin is so thin, and even with a few sparrows (hacky sack sparrows). Give it a shot….
Incidentally, the sand trick is similar to the technique used to shrink heads… but that’s another topic.”—Ron Hood

Posted by: ravensway on July 7, 2020 Category: Uncategorized ← previous - next →