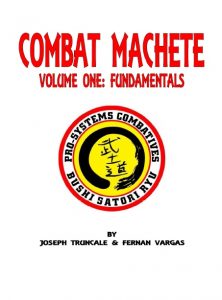 COMBAT MACHETE
Volume 1
Fundamentals
By Joseph J. Truncale & Fernan Vargas
The machete is a combination of a large knife, axe and a short sword and the practicality of this tool has made it popular all over the world. The term machete comes from the Spanish language and the first part of the name (Macho) means male or strong and used to refer to sledgehammers. There are numerous variations of the same tool depending on the specific area or country. The machete is popular all over South America, and also in places like Guyana, Barbados Grenada, Jamaica, Tobago and other countries. The machete is often used to cut through thick brush as well as for doing various jobs in agricultural communities. The machete is also used as a favorite weapon of many countries and has been used in numerous battles all over the world. It is a weapon used by many ethnic groups in West Africa. In the Philippines they also use a machete like tool called a “bolo” which is employed for chopping through the jungle and for combat. As a formal fighting art the Machete is taught in martial traditions such as, Mani, Capoeria, Kali, Silat, Guazabara, and Colombian esgrima de machete. Similar weapons are taught in various forms of Kung Fu, Krabi Krabong and historical western fencing arts.