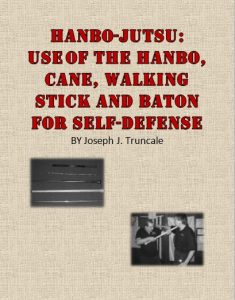 HANBO-JUTSU: USE OF THE HANBO, CANE, WALKING STICK AND BATON FOR SELF-DEFENSE
BY Joseph J. Truncale
The stick as a self-defense weapon has been around since the dawn of humankind. The first time early man picked up a stick and used it against an enemy may have been the beginning of weapon warfare. The beauty of the staff is that any length of stick can be employed as an effective self-defense tool. Most people relate the formal use of the staff, whether a Bo, Jo, Hanbo, Cane, Walking Stick and baton to the Asian martial arts. However, staff techniques for combat and self-defense were also developed to a high degree of sophistication in European countries as well. This book will focus on the use of the Hanbo, hooked cane, walking stick and straight police baton. The illustrations will include examples of how to use the Hanbo, cane, walking stick and police baton.