How To Minister To The Transgender In Your Fellowship 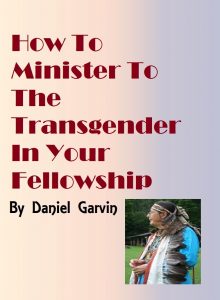 Gender, strictly speaking, is binary, male and female, determined by the sex organs you are born with, however, mentally it can be more complicated than that. During birth fluids in the womb can strongly bias a ‘brain sex’ in certain people. But just as 2% of the world’s population are redheads there are 2% of the world’s population that have a more complicated DNA and chromosomal diversity. The X chromosome is one of the two sex chromosomes in humans (the other is the Y chromosome.). Females have two X chromosomes, while males have one X and one Y chromosome. Early in embryonic development in females, one of the two X chromosomes is randomly and permanently inactivated in cells other than egg cells, normally, but every now and then scientists are observing XX males, XY females and XXY. Native Americans have described the XXY person to be ‘two spirits’. As a Native American and the author of this book I identify with the latter designation. There are many terms used to describe these more complicated people like Klinefelters, Hermaphrodites, XXXY tall athletic women, to name a few. In nature we observe that worms have both genders. Male starfish and sea horses carry the eggs. The Clown fish can change from male to female. Is the Creator one of diversity or is this the result of the fall told about in the book of Genesis? Christ taught that there are those who are born as eunuchs. John 9 says God can be glorified in the midst of birth problems. Walking in holiness and purity is the key. In my book I endeavor to explain and bring unity in the church on this often divisive issue. I share my struggle and how the Holy Spirit helps me to lead a pure life.