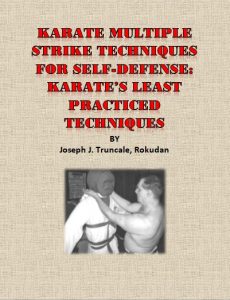 KARATE MULTIPLE STRIKE TECHNIQUES FOR SELF-DEFENSE:
KARATE’S LEAST PRACTICED TECHNIQUES
BY Joseph J. Truncale, Rokudan
The art of Karate can be beautiful and deadly. In most traditional schools, the three areas most emphasized include Basics (Kihon), Kata (forms), and sparring (Kumite). Street combat self-defense is seldom practiced. A technique that is part of most karate systems involves the use of double or multiple strikes; however, other than in a kata, these double or multiple strikes and blocks are almost never practiced as part of the traditional karate curriculum. For the purposes of this book, multiple strikes refer to two or more techniques thrown at the same time. This can include double blocks or a combination of blocking and striking at the same time. What this text will focus on is using two or more strikes at the same time for self-defense against one or more attackers.