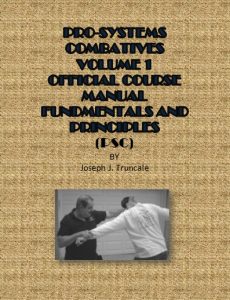 This is the first volume of the Pro-Systems Combatives (PSC) system. This manual has all the basic techniques, principles and essential warm up drills required to learn the entire basic Pro-Systems Combatives (PSC) selfdefense/offense system. This volume also covers responses to punching attacks, kicking attacks, wrist/arm grab attack counters, body grab counters and drills. Interestingly, the self-defense system known today as combatives is considered by some people as being relatively new compared to the majority of martial arts. However, this is a false assumption. Close quarter combat techniques have been around since the dawn of man. It has developed over the centuries to become one of the most effective methods of self-defense ever created. The reason for its efficiency is clear. Combatives or Close Quarter Combat was developed out of the necessity to train people for war. Ancient civilizations had to create methods of combat in order to train as many of their soldiers as possible in the shortest period of time. A close quarter combat system had to be developed that was simple and effective. The great thing about combatives is that its history is well recorded and the modern form of close quarter combat can be traced back to a handful of early pioneers in the field of military self-defense.