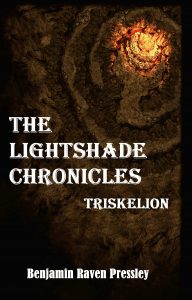 You have read about him throughout the Ravenquest series. A Death Fury raised by a kindly old Arcamagi named Grimhiss who never became evil like the other Death Furies. Now he is a hero of Terra Zem. But what was it like growing up? As you can imagine, it was not easy to convince people that he was not evil like the Death Furies are. This is volume one in a series following Drogan Lightshade and his quests for good with an ape-like warrior known as a Cain and a reptilian Arabesque. Together they become one in battle as the Triskelion. Follow this exciting tale and the Triskelion’s part in the liberation of the mysterious Icilian Labyrinth.