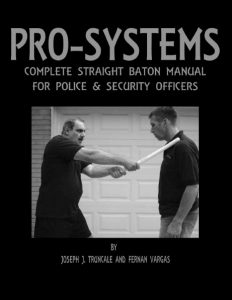 THE PRO-SYSTEMS COMPLETE STRAIGHT BATON MANUAL FOR POLICE & SECURITY OFFICERS
BY JOSEPH J. TRUNCALE AND FERNAN VARGAS
The straight stick has probably been used as a self-defense tool since a human made the first footprints on earth. Through the ages variations of the stick and staff have been created to make a better self-defense tool. The straight stick was turned into spears and swords. Understanding the basic use of the straight police baton makes it possible to use numerous other objects for self-defense. In fact, the same techniques taught for using the police baton relate to a host of stick fighting and sword arts such as Hanbo-Jutsu, Jo-Jutsu, Wakizashi-Jutsu and similar weapon combat systems. It is hoped this book will provide a basic overview of the many ways a straight baton can be used for self-defense, control and takedowns for law enforcement, security officers and martial artists studying weapons.