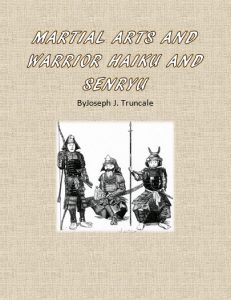 MARTIAL ARTS AND WARRIOR HAIKU AND SENRYU
ByJoseph J. Truncale
This book is focused on haiku and senryu relating to the history, philosophy, techniques, and tactics of numerous martial arts, warrior professions, and self-defense combative systems. Haiku is a Japanese poetry form which was created from a linked poem form. Basho is considered the father of what we know as haiku today even though he did not invent this poetry form. Haiku is a 17 syllable poem with three lines. The first and third line usually has 5 syllables and the second line has seven syllables; however, it is more important to focus on the message of the poem. Where the formal haiku poem is usually about a moment in time including the seasons and nature, senryu poems are subjective in nature and can be about the nature of man, his foibles, follies and can also be a humorous poem. Unlike Haiku, Senryu does not usually have a seasonal word. It is hoped those who appreciate the warrior philosophy and arts will enjoy these haiku and senryu I have written which comes from the heart.