THREAT TO THE NECK 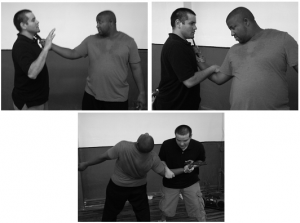 Attacker holds knife to Scouts neck in a “Hold Up” position. The Scout clamps down on the attackers wrist and arm, taking the knife out of play.  The Scout cranks the attackers elbow towards him and the wrist away from him damaging the attackers arm and affecting a takedown. 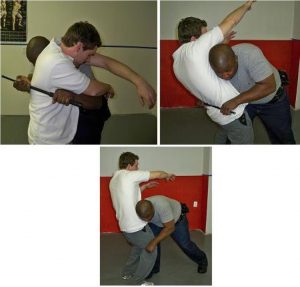 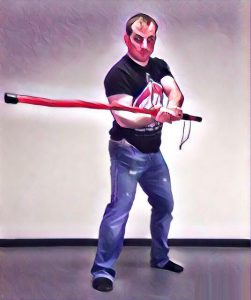 While blocking techniques create a barrier to absorb the force of an incoming blow, the parry is used to deflect them. In order to execute a parry correctly the scout should use the extended portions of their staff, either right or left to sweep across the body. 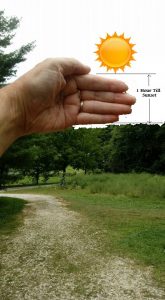 How do you determine how long it is till sunset? Hold up your hand in front of you in your line of sight placing your four fingers horizontal just under where the sun appears on the horizon. Take your other hand and place it similarly just under your first hand. Then continue putting one hand under another alternately until you count how many hands it took to arrive at the horizon. Each hand is an hour, each finger is 15 minutes. This will give you a rough estimate and will vary depending on your hand size. Test this method before you get in a survival situation to your hand size versus timing with a clock. Then you will have a more accurate idea of how accurate your measure is. 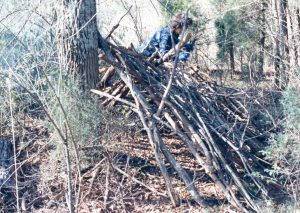 There are many emergency shelters that can be built with the materials around you, such as lean-to’s, wickiups, etc. but the quickest, most efficient emergency shelter to build is the debris shelter (see pictures below). It will keep you warm even when the temperature drops down into the ‘teens. Simply described, it is constructed of a center pole that may be leaned against a tree and be of sufficient length to allow you to lie down comfortably and sit up in a cross-legged fashion with a head’s height above your head. This allows for freedom of movement, in case you are in there for a long time. 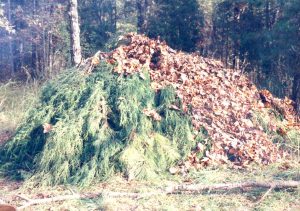 Other branches are then leaned against it leaving an opening to one side near the tree supporting it, only big enough to crawl through. Smaller branches are then laid on top of these creating a spider web effect. Then leaves are poured all over to a thickness of 12 inches or more and branches are laid on top of this to keep them from blowing away. The shelter is then filled with dry leaves and packed down 3 times. You may then crawl inside and surround yourself with this natural insulation, scooping enough against the door to cover it or construct a door from matting cattail leaves together or some similar matting. If you have ever taken time to take a squirrel’s nest apart you would see a similarity. I have 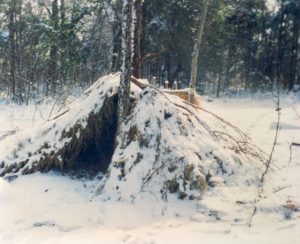 personally tested this type of shelter at 15 degrees F with it snowing, with only jeans and a T-shirt on and spent the night and remained perfectly warm.

The sling is a very formidable weapon in the hands of a practiced user and also one of my favorite weapons. Not to be confused with the slingshot, the sling is two lengths of cord, leather or woven fibers, tied on opposite ends of a pouch large enough to accommodate the projectile being thrown. The most well known example of the sling being used is when David killed Goliath in the Bible (1 Samuel 17). Judges 20:16 speaks of seven hundred left-handed slingers who were accurate with the sling up to a hair’s breadth! The sling was used, however, in many cultures for thousands of years including the Native American. 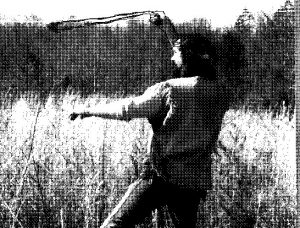 Projectiles can be any object that will fit in the pouch and is of a manageable weight. Rocks chosen should be fairly round, smooth and with a slightly flattened side. If they are too flat they may take an unpredicted sharp turn in any direction other than your target when thrown. If they are too round they are more difficult to keep from rolling out of the pouch. Solid projectiles are best, however, Robert, has successfully experimented with fragmentation-type projectiles made of clay mixed with gravel and dried in the sun. Upon throwing, the impact of release alone is enough to shatter the projectile causing it to scatter in all directions, much like a shotgun blast. To give you an idea of the power that can be achieved from the use of a sling,’ lest you doubt’ its ability to bring down big game, this same friend once threw a spark plug from a sling at a pine tree 50 yards or more away and embedded it up to the glass insulator into the tree on impact!

To use the sling, secure the anchor string and grip the release string between forefinger and thumb. Place the 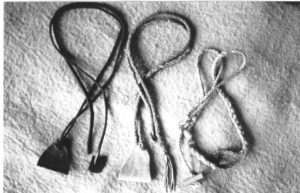 projectile flat in the pouch, not on its side as it would seem more natural to do. Level it up with the ground by adjusting your grip on the release string. Maintaining this finger grip, the sling is then swung in a circle above the head, aiming and then releasing in an overhand throw.

Aiming is achieved by watching the sling as it passes in front of your eyes, already aligned on the target, and aligning its circular path with the line of vision you have focused on your target. Centrifugal force holds your projectile in place until you are ready for release. When your target is properly sighted and aligned, turn the circular motion into an overhand 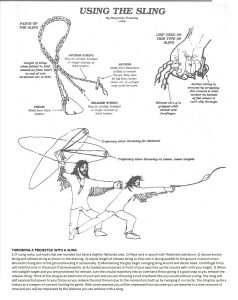 throw and simultaneously let go of the release string. This will launch your projectile with unbelievable force. Converting to an overhand throw from a circular pattern may feel difficult at first but is well worth mastering for it is much more accurate and controlled than just releasing it at some point in the circumference of the circle. This is my favorite way to use a sling some people do have success though just throwing in one motion from their side to an overhand throw.

It will take much practice to become accurate with this weapon. Just to get an idea of the power behind this weapon try seeing how far you can throw an object. I have even used a bandanna for a sling before; not much power but it works. After some practice with a sling I am sure you will be impressed! 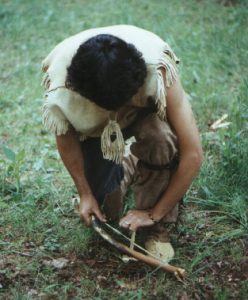 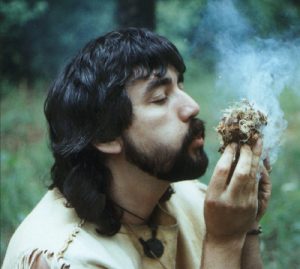 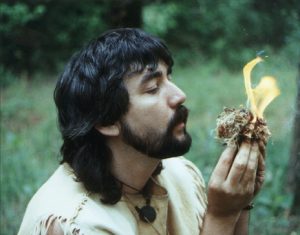 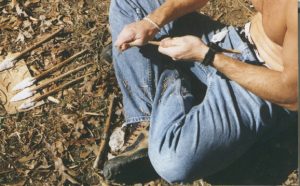 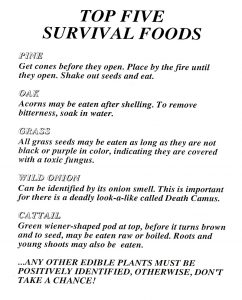